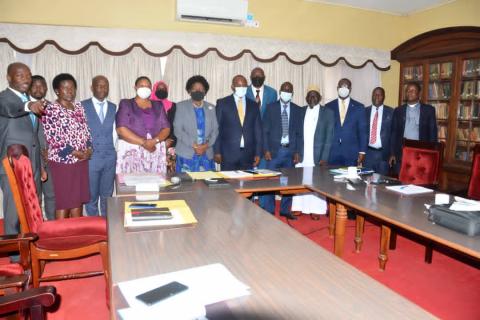 Busoga leaders under the Ministerial Coordination Committee (MCC) of the Busoga Consortium for Development (BCD) converged at the Office of the President yesterday May 11th, 2022 to receive the compiled 1st Annual Work plan under the framework of the Busoga Development Agenda (BDA) which is scheduled to be launched on 27th May 2022 in Jinja.

During the meeting which was also graced with the presence of the 1st Deputy Prime Minister, Minister of EAC Affairs and Patron of the Busoga Consortium Rt. Hon Rebecca A. Kadaga, Hon Bwino Fred Kyakulaga who doubles as Minister of State for Agriculture and Vice Chairperson of MCCrallied the leaders to support and participate in the Consortium program.

He noted that the target of the BDA implementation was to steer the Sub-region to Middle Income Status over the next 10 years sighting that Busoga was among the top 5 (five) sub-regions that had failed the Country from attaining Middle Income Status.

He also rallied the regional leaders to support the proposal for the establishment of the 1st Regional State Enterprise whose mandate will be to steer the implementation of the BDA and resource mobilization for participating stakeholders in the transformation agenda of the sub-region. Hon Bwino addressed the meeting on behalf of the Rt. Hon RukiaIsangaNakadama the Chairperson of the MCC whowas on official duty with the visiting Head of State of Tanzania H.E SamiaSuluhu Hassan.

Mr. Aggrey David Kibenge the Permanent Secretary of the Ministry of Gender, Labour Social Development made a presentation during the meeting on “Unpacking the BDA; for people centered planning and implementation”. He made a diagnosis on the relationship between the BDA, Parish Development Model (PDM) and the OPM Busoga Development Program as he complimented the authors of the BDA describing them as good patriots for Busoga. He noted that the BDA just like the PDM needed to be unpacked to enhance ownership through simple messages that can be assimilated easily at all levels of leadership and implementation. He underscored the importance for a deliberate mindset change program by the Busoga Consortium and the need to negotiate and lobby for affirmative action in favour of Busoga Sub-region. While talking about the need to take advantage of strategic placed officers in Government and CSOs, Mr. Kibenge emphasized the need for a deliberate effort to interrogate and influence MDA plans as well as those of CSOs sector and private sector organizations to align them to the BDA Pillars.

Mr. Mula noted that the work plan intends to achieve 2 (two) objectives during the 1st year of implementation. These are; facilitating and strengthening the institutional framework of the Consortium for efficient and effective implementation of the BDA as well as social mobilization of the citizenry for Local Economic participation and development.  Some of the proposed programs to kick start the implementation of the BDA include a 1 week of prayer and fasting, the Busoga Tourism Expo, coordination of the 1st Busoga Investors roundtable, work with NPA, OWC and other players to coordinate and hold the 1st Busoga Regional SMEs Symposium, among others.

The meeting was also addressed by the Governor of the Consortium Mr. Sanya Ronald who also doubles as District Chairperson Namayingo. In his remarks, Mr. Sanyaupdated the meeting on the progress made by the Consortium since talking up leadership. Among the achievements sighted included the resolution by all Local Government to make annual contributions to the sustainability of the Consortium worth 3 Million across the boards with exception of Jinja City which is to make an annual contribution of 7 Million. Mr. Sanyaalso sighted the smooth transition of leadership, resolution of support towards the proposed establishment of the 1st Regional State Enterprise, among others as some of the major achievements of the Consortium over the previous months.

While reacting to the presentations made,Hon MillyBabiryeBabalandaemphasized the importance of unity as a facilitator of development. Making reference to the biblical quote in Genesis 11:6, she appealed to all regional leaders and people of Busoga to unite and work together noting that this was the only way Busoga would quickly transit to Middle Income Status.

This prompted the leaders to resolve on a proposal for holding a 1 week of prayer and fasting during the month of July as the 1st activity before the implementation of the work plan under the BDA framework.

The meeting was closed by the Rt. Hon Rebecca A. Kadaga 1st Deputy Prime Minister, Minister for EAC Affairs and Patron of the Busoga Consortium for Development who re-echoed the need for unity prompting memories on how Busoga was the first Sub-Region to embrace Unity in Uganda when the Regional Tier was first proposed in 2005. She noted that the Consortium had given Busoga a renewed hope to focus on development of the Sub-region save for the past frameworks that were mainly politically drive.

The Rt. Hon Kadagathanked the leaders for the demonstrated resolve to change the socioeconomic fortunes of Busoga to prosperity through supporting the implementation of the BDA. He particularly thanked the Local Government leaders for the resolutions made in the best interest for the sustainability of the Consortium including the annual contributions of 3M each and Jinja City 7 Million. She informed the meeting that she had started on a program to empower religious leaders to participate in wealth creation for their improved wellbeing and guided that the Consortium needed to embrace the program as part of its agenda.

The Rt. Hon Rebecca A. Kadaga is scheduled to lead a delegation of Ministers and LCV Chairpersons from Busoga for a briefing meeting with Her Excellency Jessica Alupo, the Vice President of Uganda tomorrow Friday 13th May 2022 at the Office of the President, Kampala. 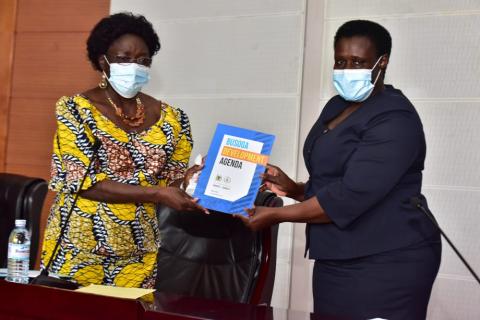 The Vice President of Uganda H.E Rtd. Maj Jessica Alupo has hosted a delegation of the Busoga Consortium leadership at the Office of the President, Kampala. The delegation led by Rt. Hon Rebecca A. Kadaga 1st Deputy Prime Minister and Patron of the Busoga Consortium had paid the courtesy visit on the Vice President to brief and rally her support towards the Consortium programs as preparations are made for the start of the implementation of the 1st Annual work plan under the Busoga Development Agenda (BDA) framework.

While making her remarks, the Rt. Hon Rebecca A. Kadaga shared with the Vice President the his story of the Consortium and some of the achievements registered since establishment in 2017 including preparation of the 1st Sub-Regional development plan in the Country dubbed the Busoga Development Agenda (BDA), promotion of Busoga potentials in Tourism and Investment at the international level through established collaborations with china such as one between Jinja City and Shenyang City, Busoga Consortium and Liaoning Province and Jinja School of Nursing and Midwifery with Shenyang Medical university.

She informed the Vice President that Busoga had leant from its past failed efforts and experiences to unite for development and that the leadership of the consortium and the people of Busoga where committed to make this initiative work to ensure the socioeconomic transformation of the sub region. She informed the Vice President of the proposed established of a Regional State enterprise to steer the implementation of the BDA and rallied her support when it is presented before Cabinet for approval. The Rt. Hon Kadaga also used the same opportunity to invite the Vice President to preside over the launch of the 1st Annual Work plan under the BDA framework which is scheduled for 27th May 2022 in Jinja.

The meeting was also attended by the Minister of Local Government Hon Raphael Magyezi who commended the Busoga leadership on the focused leadership and commitment to make the Consortium work. He informed the meeting that he had read the BDA and found it very well aligned with the Parish Development Model and NDPIII.

He pledged the support of his Ministry towards all consortium programs and introduced the Ministry’s assigned focal officer at a level of commissioner to be in charge of coordinating consortium related program called Jackie Kemigisha Kiiza. Hon Magyezi further tipped Busoga on being considered as a pilot for the implementation of the PDM under the Consortium initiative and encouraged the leaders to take advantage of the Consortium to attract more opportunities to the sub-region. The Minister noted that the Consortium initiative can be used for joint planning, lobbying, twining of cities and districts, sharing of resources, among others.

On the issue of the proposed Regional State enterprise, the Minister pledged his leadership in cabinet to have the cabinet memo on the matter presented for cabinet approval. He rallied the Vice President and all regional leaders to support him when the time comes to have the mater tabled before Cabinet.

In her remarks, the Vice President Jessica Alupo commended the 1st Deputy Prime Minister Rt. Hon Rebecca A. Kadaga for consistently continuing to work for the people of Busoga for development. She informed the leaders that she had been briefed about the Busoga Consortium by former Vice President Edward Kiwanuka Ssekandi and was impressed about the registered progress by the Consortium.

She described the Consortium as one with ability to mobilize the population for inclusive participation in the development of their regions, districts, counties, parishes and villages for socioeconomic transformation. She noted that no region in the world can be able to grow in isolation from others and congratulated the leaders of Busoga on the choice to work together.

She further expressed her appreciation to the Local Government leaders of Busoga for the expressed consensus on matters of regional development and noted that other regions ought to learn from the experiences of Busoga when the BDA implementation starts.

The Vice President commended the Minister of Local Government for the commitment to support the Consortium by appointing a liaison officer. She also assigned her Deputy Principal Private Secretary Mr. Vincent K. Musubire to be the focal person on Consortium related program in her Office. She further pledged to support all efforts to ensure the success of the Busoga Consortium including the proposal for the establishment of a Regional State Enterprise which requires Cabinet approval.